Chemix PreWorkout Review: Is it the Strongest Pre-workout Out there? 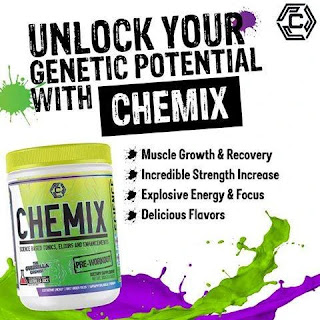 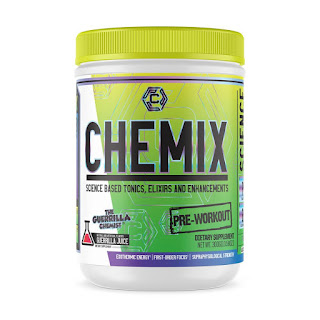 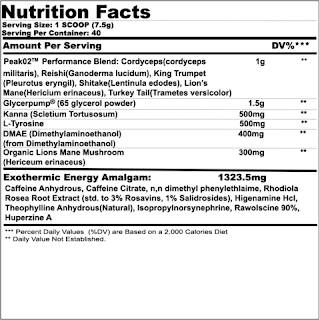 Chemix PreWorkout is a high stimulant, ultra-premium preworkout formulated by the Guerrilla Chemist to enhance body endurance, mental focus and clarity, and also to supply great cell hydration for pumps. The preworkout formula fuse ingredients with potent nootropics and stimulants to give you more energy for your workout.

What are the ingredients of Chemix PreWorkout?

Based on its Nutritional Facts here are its ingredients:

1. PeakO2™: A patented blend of 6 mushrooms (Cordyceps, Reishi, King Trumpet, Shitake, Lion's Mane, and Turkey Tail) according to the manufacturer these mushroom blend are said to bump time-to-exhaustion by 60 times, it also increase power output by 17.6% and peak power by 2.8% against placebo.

2. GlycerPump™: GlycerPump is a new version of a powdered glycerol supplement yielding 65% glycerol content. The carrier for this new-age glycerol supplement is silicon dioxide. Glycerol is known as an osmolyte, which is a molecule that attracts a lot of water and can hydrate your cells very effectively which can increase performance in the gym.

3. Kanna (Sceletium tortuosum): it's a succulent plant indegenous in South Africa in which they are use to manage anxiety and depression, enhance mood, cognitive activity, and memory. This will definitely make you active and focus in your workout.

4. Organic Lions Mane Mushroom (Hericeum erinaceus): it's a medicinal mushroom usually found in North America, Europe and Asia. It is used to improve memory, thinking skills and improve mental fatigue. It also contains erinacine and other compounds that may increase dopamine production and enhance euphoria.

Caffeine Anhydrous - it is a dehydrated caffeine that helps improve alertness and exercise performance.

Caffeine Citrate - is a central nervous system stimulant and it is used to treat breathing problems in premature infants. Caffeine blocks certain proteins (adenosine receptors) which lead to improved breathing in these infants.

N,N Dimethyl Phenylethlaime - it's a substituted phenethylamine that is used as a flavoring agent that has a stimulant effect.

Rhodiola Rosea Root Extract - it is harvested from a flower and is commonly used for increasing energy, endurance, strength, and mental capacity. It is also used as a so-called "adaptogen" to help the body adapt to and resist physical, chemical, and environmental stress.

Higenamine Hcl - is a chemical compound found in plants that includes Nandina domestica, Aconitum carmichaelii, Asarum heterotropioides, Galium divaricatum, Annona squamosa, and Nelumbo nucifera. It's like a stimulant, it increase heart contractions and speed up the heart rate.

Theophylline Anhydrous - it is a medicine for treating asthma and COPD (bronchitis, emphysema). It prevents wheezing when breating and shortness of breath. It relaxes the smooth muscle that surrounds your airways.

Isopropylnorsynephrine - it increase lipolysis or fat loss by breaking down lipids (fats) and triglycerides into glycerol and free fatty acids.

Rauwolscine - is a central nervous system stimulant, a local anesthetic and a vague aphrodisiac. It is a plant-based molecule that some use to boost fat loss & physical performance.

Huperzine A - is a compound that enhance cognitive brain functions, it is from a plant called Chinese club moss. Traditionally, it is used to reduce inflammation and to sharpen memory.


The ingredients really different and pretty unique for a preworkout, this can be a bit overwhelming since it's super strong, very intense. When I started on it, I can't take 1 full scoop my heart was pounding really hard and I almost threw up it made me a little bit nauseous. So be careful with this stuff specially if you have heart condition.

Popular posts from this blog

April 26, 2020
What Is Virgin Coconut Oil?
Virgin Coconut Oil which has a pleasant odor came from the fresh meat of the coconut. The coconut meat is often cold pressed to obtain the oil, sometimes the meat is dried up and preserved before being processed into oil. Virgin Coconut Oil is different from a regular coconut oil since they are unrefined, not bleached, and not deodorized. The oil is also produce through expeller pressed method and not expelled using chemicals or solvent. Virgin Coconut Oil is much more nutritious since the vitamins, polyphenols, fatty acids and antioxidants are maintained. Since it is not refined you will see a lot coconut flavor in the oil.

What Are The Benefits of Virgin Coconut Oil?
The combination of fatty acids in the coconut oil may have positive effects on your health, like boosting fat loss, healthy heart, and improve brain function.

October 07, 2019
These are dietary supplements that promise weight-loss by melting fats away from your body by increasing metabolism. However, we need to set some expectations here, there are no magic pills to turn your flab to lean muscles by simply ingesting pills. These supplements are designed to help in burning fat more quickly in conjunction with diet and exercise.

According to a study published by the journal Obesity Reviews, fat burner is used to describe "nutrition supplements that are claimed to acutely increase fat metabolism or energy expenditure, impair fat absorption, increase weight loss, increase fat oxidation during exercise, or somehow cause long-term adaptations that promote fat metabolism."

Manufacturers often makes overstated remarks to market their products and like other supplements they are not approved by the Food and Drug Administration (FDA), which means you need to do your research and check out the ingredients, formula, clinical evidence and safety issues. You a…
3 comments
Read more

September 02, 2019
- The Atkins Diet -  One of the most popular low carb diet programs that was created by cardiologist Robert C. Atkins in the 1960s. It emphasizes on eating protein and fat but restricts carbs, which means you have a lot of food option. You can eat steak, eggs, butter, chicken, fish, lobster, cheese etc but you'll need to avoid sugary carbs like bread, pasta, pizza, rice, chips, cookies, french fries etc.
Efficacy and safety: According to Journal of Pediatrics high protein, low carb diets for weight loss is safe and effective, specially for severely obese people. Also according to this study, this diet causes you to eat less because it curbs hunger.
Low-carb diets are very effective in losing weight is because they can reduce your appetite. Another study from The Journal of Nutrition shows that low carb diets are also effective against belly fat.
- Paleo Diet - This diet requires you to eat like a caveman or our hunter and gatherer ancestors. It's very restrictive since you…
17 comments
Read more

November 21, 2019
Nootropics which are also called smart drugs and cognitive enhancers are drugs, natural supplements, and other substances that can enhance the    brain function in healthy people. It may improve cognitive function, particularly executive functions, concentration, memory, creativity, or motivation. It can also slow down the age-related declines in brain function.

The word nootropic was derived from the Greek “to bend or shape the mind.” Here are some of the best brain supplements that may improve your brain function for better performance at work, school, or play:

1. Caffeine - it has a bitter taste and is found in the seeds, nuts, or leaves of a number of plants native to Africa, East Asia and South America which includes Coffee beans, Tea leaves, Kola nuts, and Cacao pods. It is a natural stimulant and it is the world's most widely consumed psychoactive substance. It stimulates the brain and central nervous system which reduce the feeling of tiredness and make you feel more awak…
1 comment
Read more

Best supplements to Lose Weight: Important Nutrient To Help You To Shed the Weight

December 16, 2019
What is the best supplements for weight loss? Losing weight permanently is a lifestyle change that will require you to eat healthy, workout, and balanced diet. In addition to this, according to some diet experts additional supplements are also needed to help people lose weight according to a news report.

Nutritional therapist Hannah Braye who works for Lepicol said that fiber is a key part of an individual diet and the recommended amount of fiber that we have to take everyday is 30g. Unfortunately most people are falling short and are not able to reach the daily recommended amount.

She said that people should be getting their fiber from a variety of plants like vegetables, wholegrain, fruit, lentils, beans, pulses, nuts and seeds. However most people have busy lifestyle that the only option is fast food and junk foods that are heavily processed, low in nutrients, and very low in fiber. Hannah said that Fiber has a significant role in regulating appetite. Fiber keeps us feeling ful…
1 comment
Read more

If you’re looking to change to a healthier lifestyle and change your diet, you can opt for vegetables, fruits, whole grains, and quality protein.


1. Vegetables - Vegetables contains a lot of vitamins, minerals, antioxidants, and fiber. It can also help you to lose weight since even if you eat large portion of vegetables it won't contain a lot of calories. Some vegetables may contain a mix of carbohydrates along with smaller amounts of healthy fats and protein. Broccoli contains twice as much vitamin C as is recommended for daily intake. Sweet potato has a lot of vitamin A. Asparagus is loaded with vitamin K. Bell peppers is a good source of antioxidants and vitamin C. Carrots contains fiber and vitamin K.

December 30, 2019
You have probably read that eating certain food can lower the likelihood of high blood pressure and diabetes. How about your mental health? Are there any food that can improve your mental health and boost cognitive function? The answer is yes and here are some of the popular brain foods that are good for mental health.

1. Fish that are high in omega-3 fatty acids

According to this journal increasing dietary intake of omega-3 fatty acids can be effective for both the prevention and treatment of depression. Another study published by the Journal of Clinical Psychiatry shows a  significant antidepressant properties of omega-3 PUFA.

This study from "Drugs" shows the therapeutic benefit of omega-3 fatty acids in patients with psychiatric disorders.

November 10, 2019
Moringa oleifera is a plant that is native in South Asia, particulary in the tropical and subtropical regions. It is also called "drumstick tree" because of its long, slender, and triangular seed-pods. Some called it "horseradish tree" since the roots taste like horseradish. Other terms use to call it are "moringa" and "ben oil tree" or "benzolive tree."

September 02, 2019
The diet supplements market is a billion dollar industry and is expected to reach $350 billion by 2026 according to to a new research produced by Market Study Report, LLC. The obesity problem is significantly growing across the world and in 2015 2.2 billion people are considered to be obese. Because of this there are thousand of different weight loss supplements out in the market. Of course they all claim their products are effective and that you'll lose those unwanted weight. Unfortunately, most of them are not effective and are not backed by clinical studies.

Weight loss pills, drugs and natural supplements can curb appetite by making you feel full so that you won't over eat. It can inhibit absorption of fat. Or, it can speed up fat burning that makes you burn more calories.

If you will take diet supplements to compliment healthy diet and physical activities it will definitely increase the chances and will speed up weight loss. According to a 2016 study published by the Jou…
1 comment
Read more

All content found on this website are intended for general information only and is not a substitute for professional medical advice, treatment or diagnosis. Visit your doctor or other qualified health provider if you have any questions about a medical condition. If you will change your diet seek professional medical advice first specially if you are pregnant or breastfeeding or any pre-existing conditions like diabetes. All trademarks, registered trademarks and service-marks mentioned on this site are the property of their respective owners. As an Amazon Associate I earn from qualifying purchases.